White House Press Secretary Sarah Huckabee Sanders surprised  reporters at at the start of today's press briefing by reading a nine-year-old boy's adoring letter to the president.  The letter writer's identity was not revealed and Sanders didn't disclose what steps had been taken to verify the document's authenticity. The briefing was the first where cameras were allowed since Sanders took over from Sean Spicer. Reporters were expected to ask about Republican moves in the Senate to abolish Obamacare and the president's attacks on Attorney General Sessions, among other hot topics. Sanders read the nine-year-old's letter before taking questions. 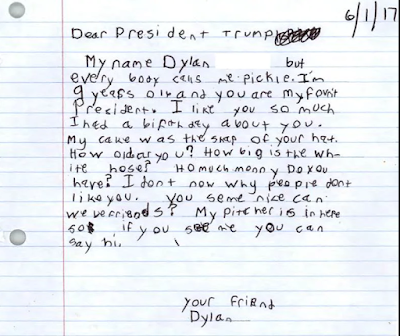 But was the letter really from a 9-year-old? 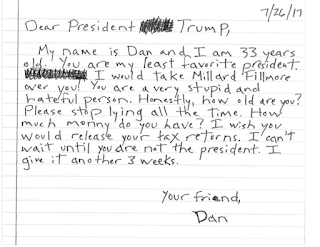 Newer Post Older Post Home
Subscribe to: Post Comments (Atom)
Pandaemonium: Milton's name in Paradise Lost for the capital of Hell
"Pandemonium ensues, but the Marx Brothers escape with their lives." Description of "Monkey Business" (1931) and just about every other Marx Brothers movie.
Posts on this site are not "fake news." They contain irony, sarcasm, satire and ridicule, as well as occasional serious commentary.