Wilhelm and Bush, Jocose to a Fault

In her book “The War that Ended Peace” about the causes of World War I, historian Margaret MacMillan describes German leader Kaiser Wilhelm II as a man who tried hard in public to seem forceful and decisive but in private was insecure and often childlike.

Part of Wilhelm’s contradictory nature was his tendency to be jocose, as he was once described by the French ambassador to Berlin. He liked practical jokes and other attempts at humor, some of which were more cruel than funny. He compelled a group of husky soldiers to dress up as women and found the spectacle hilarious. On another occasion, he cajoled his army chief of staff into dancing dressed in a tutu and feather hat. The poor man died of a heart attack during the performance. 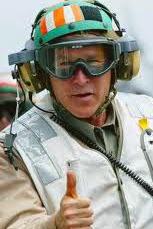 MacMillan says the Kaiser was inattentive to duty and impulsive and bellicose in foreign affairs. While Wilhelm was not the sole cause of World War I, he was one of the primary instigators, abetted by a personality that oscillated  between insecurity, indifference, and nationalistic pugnacity. 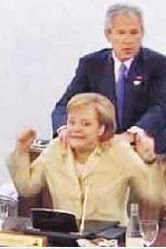 When George W. Bush was president it became evident that he shared some of the Kaiser's predilections for jocosity. At the G8 summit in 2006 he came up behind German Chancellor Angela Merkel and briefly massaged her shoulders. Merkel reacted as if set upon by the Boston Strangler.
More recently at the commemoration of the 50th anniversary of the Civil Rights Act at the LBJ Library, Bush quipped that "former presidents compare their libraries the way other men may compare their, well…”
Like the Kaiser, Bush was antagonistic to other countries, including allies. He also began a war and prematurely celebrated victory thousands of miles from the battlefield while wearing a military uniform. The Kaiser favored military uniforms and, like Bush, never went into battle himself.

Newer Post Older Post Home
Subscribe to: Post Comments (Atom)
Pandaemonium: Milton's name in Paradise Lost for the capital of Hell
"Pandemonium ensues, but the Marx Brothers escape with their lives." Description of "Monkey Business" (1931) and just about every other Marx Brothers movie.
Posts on this site are not "fake news." They contain irony, sarcasm, satire and ridicule, as well as occasional serious commentary.