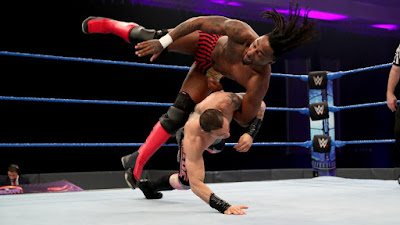 States hoping to stop the spread of coronavirus have closed schools and non-essential businesses and told citizens to stay at home except for urgent tasks like shopping for food or filling prescriptions.

But these rules have made some people edgy. President Trump, for example, said he was tired of watching reruns of old baseball games and longs for the real thing (can you believe it, baseball fans?).

Now a few governors have decided to re-define some activities as "essential" because they appeal to certain constituencies. South Carolina has allowed sex shops to stay open. In Florida professional wrestling matches will  be allowed.

Wrestling in Florida is essential to some people because it makes them lots of money. One beneficiary is Vince McMahon, CEO of World Wrestling Entertainment (WWE). McMahon is a pal of President Trump's and was named recently to the president's multi-industry council on re-opening the economy. So it's not surprising that Ron DeSantis, governor of Florida and Trump sycophant, was happy to reclassify professional wrestling as an essential  business, just like pharmacies and food markets.

Posted by Kipper at 3:41 PM No comments: 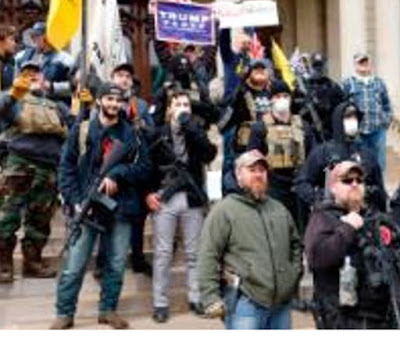 Thousands of demonstrators have blocked streets and impeded access to public buildings in Michigan, Ohio and several other states to protest state government stay-at-home orders meant to stop the spread of the coronavirus. President Trump supported  the demonstrators, tweeting that they should "liberate" their states. Most of the protesters did not wear protective masks or maintain safe distance from others, as recommended by health experts. But some did carry firearms and wave Confederate flags, actions that epidemiologists say are not effective in preventing covid 19 disease. President Trump, has questioned the need for a continued shut-down across the country and has refused to wear a protective mask. As of 4/24/20, more than 50,000 Americans have died from the virus and there is not yet a vaccine or a cure. 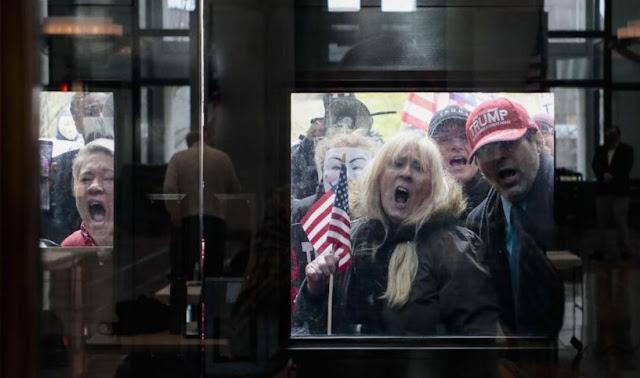 Posted by Kipper at 8:56 PM No comments:

Posted by Kipper at 2:44 PM No comments: 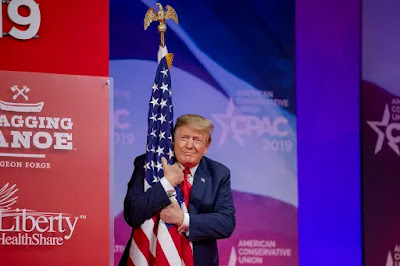 "Now we have people that lost [the election] and unfortunately wrong people in a couple of positions and they leave people for a long time that shouldn’t be there and all of a sudden they’re trying to take you out with bull shit."

Posted by Kipper at 3:26 PM No comments:

…That we here highly resolve that these dead shall not have died in vain -- that this nation, under God, shall have a new birth of freedom -- and that government of the people, by the people, for the people, shall not perish from the earth."
Abraham Lincoln Gettysburg Address, November 19, 1863.

This great Nation will endure as it has endured, will revive and will prosper. So, first of all, let me assert my firm belief that the only thing we have to fear is fear itself—nameless, unreasoning, unjustified terror which paralyzes needed efforts to convert retreat into advance.
Franklin D. Roosevelt, First Inaugural Address,  March 4, 1943
So, my fellow Americans: ask not what your country can do for you—ask what you can do for your country. My fellow citizens of the world: ask not what America will do for you, but what together we can do for the freedom of man.
John F. Kennedy Inaugural Address, January 17, 1961.

…From every mountainside, let freedom ring… And when this happens, and when we allow freedom to ring, when we let it ring from every village and every hamlet, from every state and every city, we will be able to speed up that day when all of God’s children, black men and white men, Jews and Gentiles, Protestants and Catholics, will be able to join hands and sing in the words of the old Negro spiritual: “Free at last. Free at last. Thank God Almighty, we are free at last."
Martin Luther King Jr., August 28, 1963.
This is our time…to restore prosperity and promote the cause of peace; to reclaim the American dream and reaffirm that fundamental truth, that, out of many, we are one; that while we breathe, we hope. And where we are met with cynicism and doubts and those who tell us that we can't, we will respond with that timeless creed that sums up the spirit of a people: Yes, we can.
Barrack Obama, Presidential Victory Speech,  November 5, 2008

What’s in a Name?

A Lot if You’re
Called Rick or Scott

Have you ever noticed that some of America’s worst politicians are named either Rick or Scott and that one horrible governor has both names? Read on.


Rick Snyder of Michigan. He and his administration failed to aggressively address the Flint water crisis and subsequent lead poisoning of Flint children. Also signed Michigan’s emergency manager law that allowed Snyder to fire local elected officials and replace them with handpicked leaders who were given dictatorial power over city affairs but never had to stand for election.

Scott Walker of Wisconsin. With help from a Republican controlled legislature, stripped the collective bargaining rights of public employees, cut funds for public education and attempted to place state universities under private control.

Update, 12-14-18:  Walker lost the 2018 election and will be out of office in January.  But he has signed laws passed by lame duck Republican legislators that will curtail the constitutional powers of the newly elected Democratic governor and other Democratic state officials. Rick Snyder, Michigan's lame duck governor is considering similar authoritarian measures aimed at voiding state election results.

Rick Scott of Florida. Was forced to resign as CEO of Columbia/Hospital Corporation of America because the company was found to have defrauded Medicare and Medicaid. Though the company was heavily fined, Scott was never charged with a crime and he went on to become governor of Florida.  He recently was declared winner in the race for U.S. senator even though votes in some urban areas went suspiciously uncounted and election workers were harassed by Scott supporters while they counted ballots.

Rick Perry.  Former governor of Texas. Perry’s long record of poor governance includes attacks on reproductive rights, restriction of marriage rights, attempts to use government to impose fundamentalist religious values and diversion of federal education funds to pay off the state budget deficit caused by tax cuts.  When appointed by Trump as Secretary of Energy, Perry thought the job involved supervision of the oil industry. In fact, it concerns nuclear weapons, nuclear reactors and disposal of radioactive waste.

Rick Santorum.  Former U.S. senator from Pennsylvania. He’s a perennial presidential candidate and one of America’s looniest politicians.  He has advocated the elimination of credit cards because they encourage overindulgence and profligacy, He wants Americans to eat out less because it diminishes the traditional role of women in the household and gluttony is a sin. Santorum also advocates repeal of the 21st Amendment, which ended prohibition.

Scott Pruit, Former EPA head in the Trump administration. Regularly traveled first class at government expense. Paid $50 a night in high-rent Washington for a room in a house owned by the wife of an energy lobbyist.  Spent $3.5 million in government money for a contingent of 20 personal security guards. Sent government paid aides out to buy him football tickets and also used them to scout for used mattresses from Trump hotels, presumably for use in his rented room.

Given the record of the Scott and Rick governors, it’s not surprising that three of the four are from states that rejected expansion of Medicaid under the Affordable Care Act. Michigan is the exception.  Santorum opposes any form of government health program as well as Social Security. He once told the story of his grandfather, who worked digging coal until he died at 72 and never needed government assistance. Scott Pruitt was forced out of the EPA job because he was more interested in the perks of office than protecting the environment and the health and well being of Americans.

What's Wrong with this Picture?

Posted by Kipper at 9:38 AM No comments:

Email ThisBlogThis!Share to TwitterShare to FacebookShare to Pinterest
Older Posts Home
Subscribe to: Posts (Atom)
Pandaemonium: Milton's name in Paradise Lost for the capital of Hell
"Pandemonium ensues, but the Marx Brothers escape with their lives." Description of "Monkey Business" (1931) and just about every other Marx Brothers movie.
Posts on this site are not "fake news." They contain irony, sarcasm, satire and ridicule, as well as occasional serious commentary.